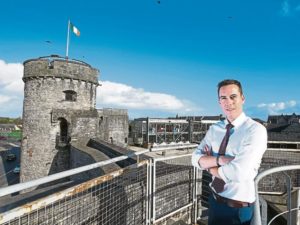 THE managing director of Shannon Heritage, which controls King John’s Castle, is to step down from his role.
Croagh man Niall O’Callaghan, a former regional manager of IDA Ireland, has told local traders that he will shortly be leaving the agency. The move was confirmed by a spokesperson for the Shannon Group this morning when contacted by the Limerick Leader.
“I have learned to value and appreciate that the diversity of operational functions is one of the greatest strengths of Shannon Heritage. Eleven locations; indoor and outdoor, east to west, day and night, urban and rural, customer facing and back of house. I am constantly inspired by the depth of collegiality, professionalism and affirmation shown by you and whom I have come to know personally over the past three years. The need to adapt to changing demands and visitor attraction trends is, we believe, what sets Shannon Heritage apart,” his email adds.

Mr O’Callaghan concluded by saying it has been a “privilege” to have worked for Shannon Heritage.

“As our paths diverge, I want you to know that I’m taking with me the valuable lessons I learned from my time working with you, and I wish you the very best in your future endeavours particularly at this difficult of times,” he said.

His departure comes against the backdrop of anger around the fact both King John’s Castle and Bunratty Castle are closing after the summer period, with the Shannon Group saying this is to do with lower-than-anticipated tourism from America due to coronavirus.

However, it’s understood his departure does not relate to this issue.

Mr O’Callaghan said he has enjoyed his three years in the role, and looks back on this time with great pride.

Shannon Group has confirmed that Niall O’Callaghan, Managing Director, Shannon Heritage, has informed the Group of his decision to leave the Company in order to take up other opportunities.

(From the Limerick Leader)