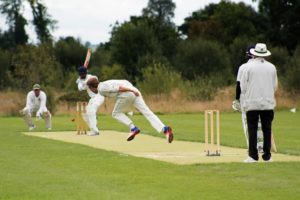 After plotting its most comprehensive pre-season programme in preparation for a big 2020, the Coronavirus (COVID-19) pandemic took the wind out of the Limerick Cricket Club’s sails – but not for long, as the Club’s members and volunteers are pulling together during these challenging times. Limerick Cricket Club.

The club has been playing its cricket since 2011 at The Manor Fields, Adare. “Our club has enriched itself in developing a sense of community in the local area, obtaining sponsorship from the nearby Fitzgeralds Woodlands House Hotel and Spa and frequenting Bill Chawkes gastro bar after matches on Saturday and Sunday evenings, where servers and customers take great interest in the team’s progress.” Says Stephen Hackett, Limerick Cricket Club Secretary.

While cricket has been played on the banks of the Shannon for around 200 years, Limerick Cricket Club itself was started by a group of local cricket enthusiasts in 1968. It recently celebrated its 50th anniversary, seeing its 1st XI make the final of the Clear Currency National Cup for the first time in that celebratory year.

The club was preparing for another year of growth in 2020 before the COVID-19 pandemic outbreak. Despite the challenges and uncertainty, the club’s members and players are optimistic about the future.

“At this moment, it is unclear how heavy the impact will be for the club. We were feeling like we were in a good spot with our pre-season preparations – in fact, it was probably the best we had prepared for a season since I’ve been in the club, after holding a full schedule of indoor sessions stretching back before Christmas.”

“There was a significant level of anticipation towards getting outside and playing, and – when I think about our schedule – we would have played two pre-season games already and the season would be underway proper – but COVID-19 put rapid halt on our season.”

« Adare Manor provides meals to frontline staff at UHLAdare’s Sinead set to continue in Rose of Tralee role as 2020 festival is cancelled. »