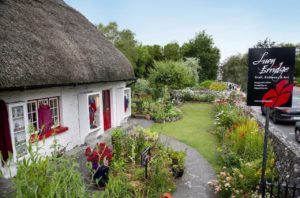 The tale of Adare’s thatched cottages began in the 1830’s when the wife of the 2nd Earl of Dunraven, Caroline Countess of Dunraven, gave the order for them to be built. Servants and workers of The Dunraven Estate lived in the cottages and although they appear small today, residents of the cottages lived a very good life. The Cottages came with a garden plot big enough to grow vegetables or to hold a pig or goat in.
At the time of building the general roof covering of choice and economic necessity would have been the thatched roof, due to the fact that the organic matter of a thatched roof tended to be available locally and therefore much less expensive than solid roofing materials.
Wheat straw was the most popular material for thatching buildings in Ireland; though flax, rye, oat straw, reeds, rushes and tough grasses have all been used in different parts, depending on the region and availability. The downside of thatched roofing is its high maintenance requirements. There are varying factors that contribute to the decay of a thatched roof, such as neglect, storm damage and the damp Irish climate. The thatch must be regularly renewed if it is to last, thus the very oldest surviving thatches can be as much as seven foot deep.
Lucy Erridge’s cottage was last fully re thatched in 2002 by John Egan, a thatcher from Co Clare and in the intervening years the ridge has been repaired every 8 years or so.
Thatchers use traditional craft skills, materials and tools to replace and repair thatched roofs. It can take up to five years to learn the skills and be considered a qualified thatcher. Some thatchers also grow and harvest their own thatching materials.
The thatchers’ art consists of carefully laying 5 to 6 foot bundles of reeds atop one another so that an impenetrable shell of waterproofing covers a roof. Each thatch layer is built up to a minimum thickness of around 14 inches and gravity carries rain, sleet, and snow down and off the roof.

A full re – thatching involves:
• Putting up scaffolding or securing ladders to the building to allow access to the roof
• Stripping off the old roof
• Checking the roof timbers for damage or rot
• Repairing, treating or replacing timbers where necessary
• Preparing the materials – straw, wheat reed or water reed – into bundles ready for use
• Starting at the eves, bundles of thatch are secured to the roof timbers (battens), using tarred cord or metal hooks working up to the ridges
• A range of thatching craft tools are used, including shearing hooks, needles, eave-knives and mallets.
Lucy Erridge Cottage – the history.

Michael Fitzgerald lived in this cottage from 1861 – 1882 and it was split into separate spaces in 1868 and the office and yard were used by the Roman Catholic Clergy until 1929.

The McGrath Family moved into the cottage in 1886 and remained there until Ida McGrath [3rd Generation] died in 1970. In the early 1900’s the McGrath family worked as carpenters and housekeepers. The youngest son was a scholar.
Lucy Erridge took ownership of the cottage in 1994 and turned it into a small shop and it was fully thatched in 2002.