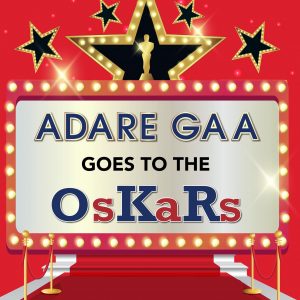 Don’t forget to book your tickets for the OsKars, to take place on Saturday 30th November at Limerick Racecourse. Admission to the OsKaRs is €30.

It is all for a good cause as Adare GAA Club is hosting its very own OsKaRs night. There is a total cast of 75 who are presently rehearsing their roles in the seven movies, which include Braveheart, Calendar Girls, Man About Dog, Happy Gilmore, Michael Collins, The Snapper, and Fr Ted. Will be seeing future stars of the silver screen in some of these box office successes?

The cast will be given acting lessons by production company, Kevin Rowe Events and the movies – 10 minutes in length – will be professionally shot. Our local actors will act out well known scenes which will be shot in the locality. Then on OsKaRs night it will be like Hollywood with the red carpet, paparazzi, movies screening and awards including best actor and best movie.

This is a novel community-based effort and is sure to be well attended on the night. In the meantime there are lots of fund raising events for each film cast occurring in the village which will hopefully be well supported.

The cast of Braveheart are holding a Medieval Banquet at Bill Chawkes Bar Adare on Saturday 16th November starting at 9pm until late. Music on the night is by Jason Fallon and tickets are only €10 each…so be a brave heart and support the cast.