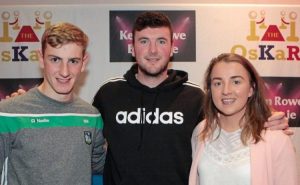 Limerick Hurling and Camogie Captains, Declan Hannon and Caoimhe Costello will join the community of Adare and become movie stars this November.

It will all be for a good cause as Adare GAA Club is hosting its very own OsKaRs night. It takes place in the Limerick Racecourse on Saturday, November 30. Over 100 attended the launch on Monday evening in Fitzgerald’s Woodlands House Hotel & Spa.

Chairman of the organising committee, Aidan O’Rahilly says they have a total cast of 75. They will be given acting lessons by production company, Kevin Rowe Events and the movies – 10 minutes in length – will be professionally shot. They will act out well known scenes which will be shot in the locality. Then on OsKaR night it will be like Hollywood with the red carpet, paparazzi, movies screening and awards like best actor and best movie.

The seven films are Braveheart, Calendar Girls, Man About Dog, Happy Gilmore, Michael Collins, The Snapper, and Fr Ted is back to serve you up some laughs, and some tea of course!

“We were looking for something novel that could be community-based which is very important. There is no point in having a fundraiser unless you can attract people who have had no previous involvement in the club but would like to be part of the event,” said Aidan O’Rahilly. The OsKaRs fits the bill.

“A number of the cast are members of the community rather than the club. We are hoping it will be a whole community-based fundraiser,” he said. There will be various fundraising events for each film cast in the coming weeks and months.

It promises to be a great night. For tickets and more information see the club’s Facebook page or members of the organising committee.