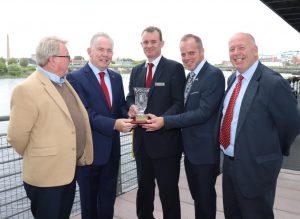 The 5* Adare Manor, voted ‘Hotel of the Year 2018’ at the world-renowned global Virtuoso ‘Best of the Best Awards’ and recently voted ‘AA Hotel of the Year 2019’, the most prestigious prize in the Irish hospitality industry, are delighted to announce that the highly successful team who secured golf’s most prestigious international tournament, the Ryder Cup for 2026 have been named the Limerick Persons of the Month.

Colm Hannon, CEO at Adare Manor, accepted the Award along with the resort’s Golf Course Superintendent, Alan MacDonnell, on behalf of the team who secured the return of the Ryder Cup to Ireland for the first time in 20 years.  The Ryder Cup coming to Ireland is great news for the community of Adare, the County of Limerick, the Mid West region and the whole of Ireland.

“It is a great honour for me to accept the Limerick Persons of the Month Award on behalf of our hugely committed and hard-working team at Adare Manor.  It was a dream of JP, Noreen and the McManus family to bring The Ryder Cup to Limerick and Ireland.  It has been a work in progress for the last couple of years and we are delighted that it has all come to fruition.  It is a great opportunity to showcase Ireland.  We hope the many tourist, golfing and business organisations will work together to identify all the opportunities for the benefit of the Ryder Cup tournaments, the Irish economy and across the south west community.

“I would like to take this opportunity to thank most sincerely our guests and everyone who has supported the team at Adare Manor to date, and a very special word of thanks to every individual member of the teams across all departments at Adare Manor.  Every accolade highlights the great work being carried out by the team and serves as great encouragement for the future of the resort”.

Since the re-opening of the resort in November 2017, following an extensive restoration, refurbishment and expansion programme, Adare Manor has attracted worldwide attention and collected a number of international awards and accolades. The securing of the Ryder Cup confirms Adare Manor as one of the leading hotel and golf resorts in the world.

The Limerick Person of the Month award is sponsored by the Limerick Leader, media agency Southern and the Clayton Hotel.