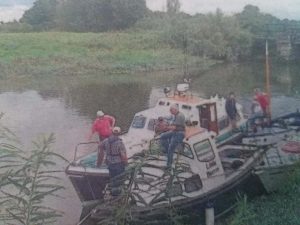 The Pope’s Quay Restoration project is one of a number of proposals aimed at realising the full potential of Adare as a tourist hub which would also have benefits for the surrounding area.

Pope’s Quay, just a short distance down from the railway bridge, was established in medieval times and served the community of Adare until the middle of the last century. Turf and coal were brought by boat to the riverside quay. The restoration of the quay is an important objective in a new five year plan commissioned by Adare Community Trust. According to Dan Neville, chairman of ACT, “it would open up the potential of the Maigue as a recreational amenity for boating and kayaking. Opening the quay would connect Adare to the Shannon, via Askeaton, Foynes and Glin and also up river to Croom”.

A flotilla of boats recently travelled up from Askeaton to Adare to test out the amenity and those who made the journey were overjoyed by the unique natural beauty of the Maigue boat trip.

(Read more on this news item in the Limerick Leader)