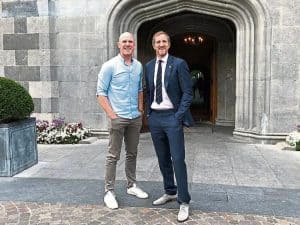 The former England, Leicester Tiger and Harlequins rugby union player, Will Greenwood, was full of praise for Adare Manor for their “unbelievable hospitality” and described the Golf Course at Adare Manor as being “truly sensational”. Greenwood, a brilliant centre in his day, also posted a video of himself playing golf at the Manor. Greenwood described the course as “The most stunningly beautiful amazingly insanely awesome golf course and hotel. If you get the chance…. you have to go!
During his career, Greenwood earned 55 international caps for England and scored 31 tries before retiring at the end of the 2005/6 season.

Photo compliments of the Limerick Leader. Paul O’Connell and Will Greenwood during a recent visit to Adare Manor.