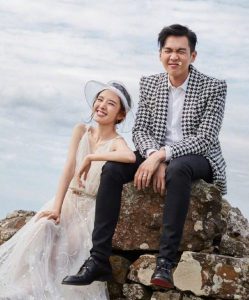 The wonderful news for is that they have started sharing snaps of their romantic trip on Weibo.

Tourism Ireland in China worked with the couple before they jetted into Ireland and it was arranged that they’d take pre-wedding snaps at some of our top attractions.

The newlyweds took pre-wedding shots at Dunluce Castle, as well as the Dark Hedges featured in Game of Thrones, and allowed Tourism Ireland use the pics for promotion in China.

Tourism Ireland CEO Niall Gibbons said: “its wonderful news that Tang Yixin and Zhang Ruoyun have chosen the island of Ireland as their wedding venue and for their pre-wedding photos.
“Tourism Ireland will take every opportunity to exploit the tourism potential from the extensive publicity in China and to really leverage the fact that this couple has chosen Ireland and Adare Manor.