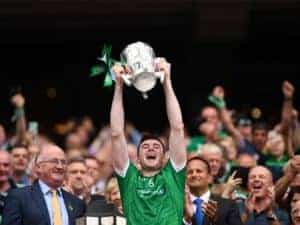 Will Declan Hannon join the two great hurling heroes of the past, Mick Mackey and Timmy Ryan from Ahane, who captained Limerick to win Munster, All-Ireland and league trophies?

Sunday will tell all at the LIT Gaelic Grounds when Limerick face Tipperary in what should be a pulsating Munster Senior Hurling Final which will be played before a capacity crowd. Adare hurling fans and indeed all Limerick fans wish Declan and his team every good wish. Declan is one of six members of the Limerick panel to have started in two Munster SHC finals. “It’s a day that everyone wants to be involved in,” said the Adare man, who started in attack in the 2013 and 2014 finals.
“Everyone wants to tick the box of having a Munster Championship”

“It’s brilliant and puts a smile on your face when you think of being involved, especially in Limerick, they don’t come around too often so you want to make the most of them and enjoy them as much as you can,” outlined Hannon at this Tuesday night’s pre-final media event.

“Everybody wants to go the direct route and the great thing about Sunday is that if you win there is a trophy there too which would be fantastic for this group of players to add to the cabinet and especially here in the Gaelic Grounds.”

(For a full report read The Limerick Leader)