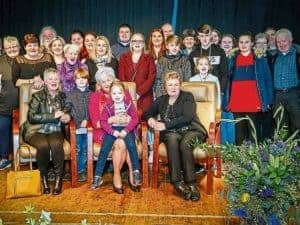 Liz Toomey, who took up her job in the Post Office in 1975 was truly honoured by the people of Adare with a massive party in the Village Hall, where she was presented with a travel voucher to the value of €6,000, a painting of the post office by Des O’Sullivan, a painting of Adare Manor by Lady Dunraven and a massive bouquet.

Tony Treacy spoke of the long association with his family, as his mother, grandmother and great grandmother had run the post office until Liz took over in 1986. Liz’s own grandfather was a postman in Kilfinney and her grandaunt Annie had worked for Tony’s grandmother. Many tributes were paid to Liz by old friends including Dolly O’Neill, who recalled Liz’s kindness to her when she was widowed and by Billy Chawke, who regaled those attending with some amusing tales of bygone years associated with the post office.

Liz said that she was very honoured to have served Adare for the past thirty three years and she thanked those who supported her, including the Three Musketeers, Mike Alfred, Mick O’Neill and Ollie Hartnett. She thanked the community for holding the party for her. Liam O’Kelly was a brilliant MC on the day.

The new post master in Adare is David Curtin and the post office is located at Londis on Station Road, operated by Cathy Lowry.
( Photo with the kind permission of the Limerick Leader)