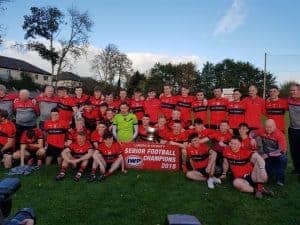 Adare are once again crowned County Senior Football Champions after a thrilling final played on Sunday 21st November at Newcastle West. This was a cracking match, described by many as one of the best County Finals ever as Ballylanders just came up short. Adare played very attractive high quality possession football throughout and although trailing by 4 points at half time they kept their composure and gradually brought the sides level through some magnificent scores. Adare kicked seven successive points at the start of the second half to move themselves into a lead they never lost, and in the fourth minute of injury-time late substitute Charlie McCarthy secured the win with the final’s only goal.

Adare opened the scoring but half way through the opening 30 minutes, Ballylanders were 0-5 to 0-1 clear but Mikey Lyons and Stephen Keeley replied with Adare points. Three unanswered points from Adare had it back to a one point game after 25 minutes with Hugh Bourke and Mark Connolly on the mark.

But it was Ballylanders that finished on top again and brought a four point lead into the break. Adare brought more urgency to the second half and points from Jack English and Mark Connolly tied up the final for just the second time at 0-9 each and just eight minutes played in the new half.

Hugh Bourke and Paul Maher got in on the scoring and Adare were 0-12 to 0-9 ahead as the final was about to enter the final quarter.

Ballylanders had to wait until the 15th minute of the second half to score and when they did, they found three in the next five minutes and it was a one-point game, with 10 minutes to play.

That was it from Ballylanders though and the only score remaining came in the fourth minute of injury time when a counter attack from Adare saw McCarthy goal.