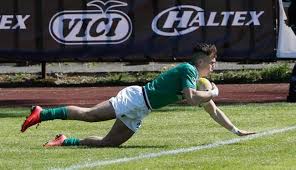 For the third year in a row the Ireland Under-18 Men’s Sevens squad have a top-two ranking in Europe, following their runners-up finish behind France yesterday at the Rugby Europe U-18 Men’s Sevens Championship in Panevezys, Lithuania.

Playing in their first tournament together, Simon Broughton’s  young guns acquitted themselves superbly with five wins out of six, a tally of 32 tries scored and ten conceded, and they proved to be the only team to run France close all weekend, losing out 26-17 in the end.

As well as showing his leadership qualities as captain, Glenstal Abbey flyer  Ronan Quinn from Adare  finished as Ireland’s top try scorer with six across the two days, followed by four each from his Munster colleague Jack Hunt and Leinster’s Andrew Smith and Ben Watson.