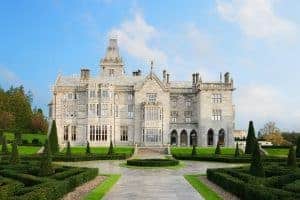 The newly re-opened Adare Manor has been named one of the world’s hottest stays for 2018 by Travel + Leisure magazine.
The US magazine’s ‘It List’ is an influential round-up of the most anticipated “new and reborn properties” around the globe every year.
T+L’s editors pick their inclusions with one mission, it says – “what properties will truly be game changers for our readers”.
Adare Manor, which re-opened last November following a multi-million euro renovation, is dubbed “one of Ireland’s most beloved properties”.
Travel + Leisure cites its Tom Fazio-designed golf course, La Mer spa and new 42 bedroom wing in the write-up, along with experiences like falconry, afternoon tea in the Gallery, and a collection of 100 rare whiskeys in the underground Tack Room.
“In keeping with the original style, the rooms and public spaces feature oil paintings and heraldry to satisfy all those time-travel fantasies,” it gushes.
56 properties from around the world are included in the list, ranging from London’s The Ned (the newest opening from the SoHo House Group) to Rwanda’s first luxury safari accommodation, Wilderness Safaris Bisate Lodge.
The #TLItList is “our definitive guide to hotels that are destinations in their own right,” the magazine adds

« Adare Manor Cocktail Champions 2018The Bear at the Manor ! »