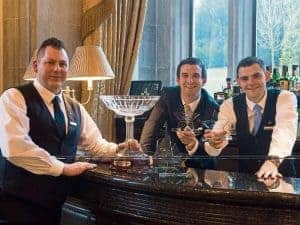 Adare Manor’s expert mixologist has been crowned Ireland’s cocktail champion and the hotel won a total of six awards at the National Cocktail Championships and Bartender Awards. The annual awards recognise the expertise and creativity among Ireland’s finest mixologists in bars throughout the country.

His winning cocktail included a unique mix of ingredients, including Star of Bombay Gin, sake, fresh lime, rice milk, yuzu puree and matcha green tea syrup, was beautifully and unusually served in a round glass bowl.

“We are delighted for Ariel, Skirmantas, Finbar and Aaron, and the wider Adare Manor team. Ariel’s passion and reputation for crafting the perfect cocktail and his boundless creativity inform his work at Adare Manor,” said general manager Paul Heery.

He added, “From new twists on traditional favourites to ever-changing menus of seasonal cocktails, many of Ariel’s creations feature special ingredients sourced from Adare Manor’s own gardens and grounds. Ariel and his team have a lot of interesting cocktails, which they will exclusively unveil to Adare Manor guests over the months ahead”.

For more information about Adare Manor, visit their website, www.adaremanor.com.

« Adare people honoured at the Limerick Person of the Year Awards 2017.Adare Manor named one of world’s hottest hotels by Travel + Leisure Mag. »